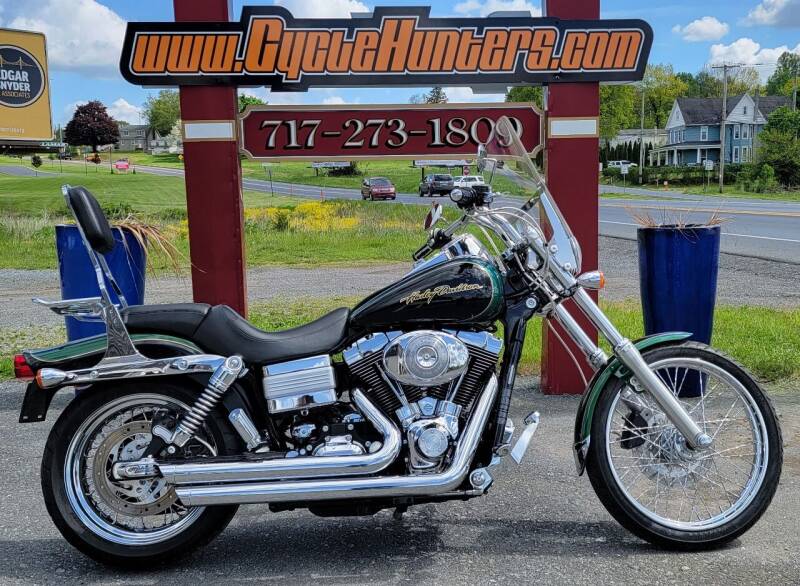 For years, the Harley-Davidson Wide Glide has been the Dyna with attitude. Its kicked out, wide-set front fork legs and near-ape-hanger handlebar took it about as close to a real chopper as a factory-built motorcycle dares go. But even bad-ass choppers must eventually heed the march of progress, and for 2006, the FXDWG joined the rest of Harley's Dyna family in series of major upgrades. The headline change is the standard "Cruise Drive" six-speed transmission, which debuts in the Dyna line, while the rest of Harley's motorcycles continue to get by with five gearbox cogs. Six speeds are just the beginning of the list of improvements for the 2006 Dyna models. Harley sequential-port electronic fuel injection is now standard, which adds the "I" at the end of the bike's designation. The clutch requires significantly less lever effort on the 2006 model. The rear tire is now 160mm wide. Both axles are now a full inch in diameter to further increase rigidity. The fork legs are beefier too, with stanchion tubes that have grown to 49mm in diameter. The completely new gearbox is a huge advancement, but not just for the additional ratio choice. This new Dyna six-speed is the best-shifting gearbox in any big twin of any brand. Shifting is suddenly light, quick, impressively smooth, quiet, and positive. Neutral is easy to locate too. Helical-cut gears that mesh more much quietly than the straight-cut gears used previously eliminate that traditional clank. This bike has a beautiful green metallic paint that has different hues when walking around it. It's just amazing in the sunlight for sure. This wide glide has the aftermarket exhaust for that added bark, passenger back rest, and windshield. Like all our bikes this will be fully serviced, inspected and detailed at the time you take delivery. See this and other great deals at www.cyclehunters.com HaldemanAuto/cyclehunters.com 102 Old Ebenezer Rd Lebanon Pa, 17046 717-273-1809