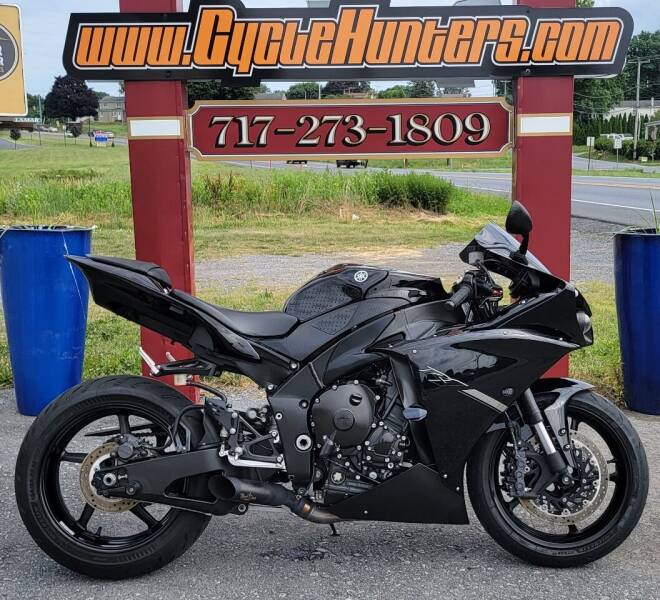 The 2012 Yamaha YZF-R1 comes with plenty of styling cues, including the upper fairing with a revised headlight cowl, giving the bike an aggressive and more modern styling cue. That’s complimented by new LED position lights, new hexagon-shaped muffler caps, and heat shields for a sharper profile at the rear. The footrests have been redesigned from the previous model for great boot sole contact and advanced rider/motorcycle interface while new silencer heat guards and end caps are re-styled to give the rear end of the bike a more compact look. The 2012 Yamaha YZF-R1 is powered by a 998cc, liquid-cooled 4-cylinder DOHC 16-valve engine with titanium intake valves. Unique to Yamaha is the crossplane crankshaft technology that has proven to be a home-run technology for Yamaha’s MotoGP machines. Unlike typical inline-four engine design, where the two outer and two inner pistons move together in pairs with 180°intervals, the crossplane crankshaft has each connecting rod 90° with a unique firing order of 270° –180° – 90° – 180°. What this does is overcome the inherent fluctuations in inertial torque during each engine revolution, and the accompanying peaky torque characteristics. Instead, combustion torque continues to build, giving the rider more linear throttle response with awesome power and traction out of the corners. A forced air intake system is also part of the whole set-up, increasing the engine’s intake efficiency by using the natural airflow during riding to pressurize the air in the air box. This, in turn, contributes to the bike’s power delivery characteristics in the high-speed range, while the design also helps to minimize intake noise. The bike’s fuel-injected engine also takes full advantage of Yamaha’s YCC-T technology, the MotoGP-inspired fly-by-wire technology that’s used to deliver instant throttle response. The YCC-T combines with the YCC-I variable intake system that broadens the spread of the bike’s overall power. For 2012, the YZF-R1 receives another benefit from MotoGP technology – a seven-level Traction Control System. The system has been developed so the rider does not feel any unnatural or has intervention from the system. In addition, traction control can aid in reducing tire wear due to less wheel spin and when you couple that with the three level D-Mode electronics throttle response control, you have a bike that offers 21 different choices available to tailor the YZF-R1 to their riding preference. This bike is a raven edition with it's all blacked out look. It has an aftermaket pipe to let the crossplane motor breath and roar. LIke all our bikes this will be fully serviced, inspected and detailed at the time you take delivery. See this and other great deals at www.cyclehunters.com HaldemanAuto/cyclehunters.com 102 Old Ebenezer Rd Lebanon Pa, 17046 717-273-1809